by JD Archer
Prior to the lake’s drainage, the wetland environment provided a diverse array of resources, including salmon, sturgeon, waterfowl, elk, and deer. The Stó:lō encouraged and maintained berry picking and root harvesting areas around the lake through selective burning. They also trapped sturgeon along a massive weir built at the point where the Sumas River left the lake. Crossed poles, 8 inches in diameter, driven into the riverbed formed the frame of the weir, while smaller poles formed a fence along this frame. More poles were passed between these crossed poles to form a bridge. The whole construction was 200’ across, and up to 20’ deep in places.

Wetlands throughout North America were considered a dangerous nuisance by many European settlers in the eighteenth and nineteenth century. The damp, murky environments were seen as homes of vermin and disease which got in the way of travel and development and would be put to better use as agricultural land. By the late 1800s a settler community was growing in the Sumas area, and many of the settlers held exactly these views about Sumas Lake. 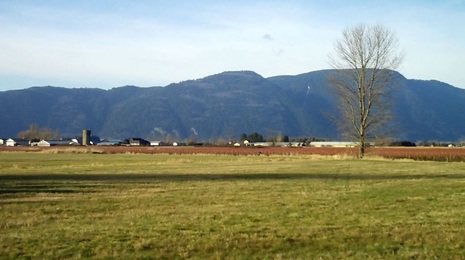 Sumas Prairie near Bellrose Rd and former BC Electric railway line - 2013
The settlers were bothered by mosquitos, which during the summer forced people to wear several layers of clothing, wrap newspapers around their ankles, hold gauze over their faces, and light smudge fires near the door. The regular floods which accompanied seasonal changes in the lake’s size limited settlement to ridges which run across the prairie, and several massive floods destroyed crops and homes. Farmers saw the bottom of the shallow lake as potential farmland wasted. By the 1920s, car-owning Vancouverites on a Sunday drive in the valley were annoyed by the circuitous and often submerged route Old Yale Road took to get around the lake. The BC Electric Railway Company also found the lake sitting in the way of a straight route from Abbotsford to Chilliwack.
With the lake annoying so many different groups of people, it is hardly surprising that demands for diking and draining began as early as 1876. In the 1880s two attempts were undertaken only to be washed away by floodwaters, and the next serious attempts weren’t considered until the beginning of the twentieth century. Drainage plans were supported by politicians and the local newspaper The Abbotsford Post. The only recorded opposing viewpoint is that of Sumas Chief Ned, who commented on diking when speaking to the McKenna-McBride Commission, saying: “I am against the dyking because that will mean more starvation for us.” (Thom and Cameron 1997: 178)

Looking west along the BC Electric railway line from Vedder Mountain substation – ca. 1916 From: Cameron, Laura. 1997 Openings: A Meditation on History, Method, and Sumas Lake, p 75. McGill-Queen’s University Press, Montreal
The drainage of Sumas Lake in the 1920s, then, was more in the interests of the settler community than it was in the interests of the Sumas. Ironically, however, the results of the drainage weren’t particularly advantageous to either. The Sumas had their territory reduced even farther than it had already been by the creation of reserves. The Aylechootlook reserve, near the point where Highway 1 now crosses the Vedder canal, was halved by the construction of a dike. The band was compensated $7 an acre at a time when the asking price for an acre of lake-bottom was $200.

Local farmers were also poorly served. In 1919 the projected cost for the drainage was $1,500,000. By 1920 it had risen to $1,800,000. The actual cost was $3,700,000 after land survey and improvements. The provincial government taxed Sumas landowners to cover the cost, even though they had not been able to vote on the cost increases after 1920. The land, which was supposed to be cheaply available to small farmers for food production, was so expensive and full of weeds that it was mainly companies who bought it. Rather than food, they primarily grew hops and tobacco. Ironically, nearly a century later both Abbotsford and Chilliwack market themselves as wholesome rural farming communities with a long heritage of fiscally prudent family farming.

Thom, Brian and Laura Cameron
1997 Changing Land Use in Sólh Téméxw (Our Land): Population, Transportation, Ecology and Heritage. In You Are Asked to Witness: The Stó:lō in Canada’s Pacific Coast History, edited by Kieth Thor Carlson, pp. 164-180. Stó:lō Heritage Trust, Chilliwack, BC

Openings: A Meditation on History, Method, and Sumas Lake by Laura Cameron
Available at the Fraser Valley Regional Library http://fvrl.bibliocommons.com/item/show/1185248021_openings

One Foot on the Border: A History of Sumas Prairie and Area, edited by Daphne Sleigh
Available at the Fraser Valley Regional Library http://fvrl.bibliocommons.com/item/show/1185248021_openings
Or at The Book Man
http://www.bookman.ca/index.cfm?method=products.productDrilldown&productid=d48a4540-25b3-a18a-c5a8-dd9c3b98e0bc&sortBy=CustomChar1&searchTxt=one%20foot%20on%20the%20border&search&

You Are Asked to Witness: The Stó:lō in Canada’s Pacific Coast History, edited by Keith Thor Carlson
Available at the Fraser Valley Regional Library
http://fvrl.bibliocommons.com/item/show/1164873021_you_are_asked_to_witness

Archival photos of the Sumas Reclamation Project are available from the Reach Gallery Musem in Abbotsford at: http://www.thereach.ca/photos_search/results/taxonomy%3A159

The Chilliwack Museum and Archives has an online exhibit covering the history of flooding in Chilliwack around the time of the Sumas Reclamation Project at: http://www.chilliwackmuseum.ca/Flood_1.html

The Chilliwack Museum and Archives also has archival photos and documents from the time of the Sumas Reclamation Project. Their archives are can be searched at: http://chilliwack.pastperfect-online.com/33335cgi/mweb.exe?request=ks or visited in person at Evergreen Hall, 9291 Corbould Street, Chilliwack, BC